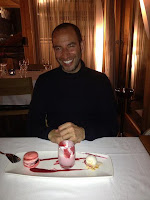 Born in Montreal, Quebec. Three months of the year are dark, mind numbingly cold with colossal amounts of snow. It’s ideal for picking up a sport such as cycling. To be fair, I dabbled in hockey (in Canada, hockey is hockey – we don’t qualify the sport as ice hockey). But at 160 cm and 53 odd kilos, I soon learned that contact sport was not my calling. I progressed to competitive alpine skiing where my low centre of gravity was a good thing but my lack of mass a bad thing.

Soon I learned that small guys can do okay on a bike – something to do with power to weight ratio – and I started racing bikes. The summers in Montreal are hot, sunny and dry but only last a few months (if we are lucky).

So, why am I telling you all this and how is it relevant to the mHealth Grand Tour? Well, as a Canadian, who grew up (as much as one can grow up when you stop at 160 cm) watching the Liege-Bastogne-Liege, The Tour de France and the Vuelta Espagna, I always dreamed of riding through the Ardennes and tackling a mur* or two. I couldn’t wait to climb a mythical peak in the Alps and descend a narrow, winding path in the Pyrenees.

Imagine my surprise and joy (and luck) when I learned the GSMA was organizing a charity ride to raise awareness of diabetes and the good that mobile technology can achieve in improving the quality of life of people suffering not only from diabetes but all sort of health conditions. It was the perfect trifecta; do the sport I love through legendary parts of Europe, help with a good cause and do it as part of my day job.

*    French for “wall” – how Belgian cycling fans refer to the short but very steep cobbled climbs in the Ardennes.

Nick Rossman works as a project manager in the GSMA Connected Living Programme, where his cheeky grin lights up the place. And really, we never noticed he was small. We did notice he was Canadian.

Posted by mhealth4diabetes at 22:31 No comments:

Limits exist only in people’s minds! 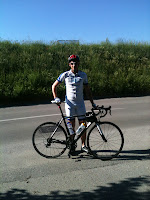 My name is Nenad Šimunko, I’m from Croatia and I work for the Croatian Diabetes Association. When I was 6 years old I was diagnosed with type 1 diabetes. Now I’m 29 and I’m living my life to the full with my motto "Limits exist only in people’s minds".

With that motto tattoed on my back I’m trying to motivate people and show them that diabetes isn’t something that should stop you in anything you want to do in life.

Three and a half years ago I weighed 105 kilograms and I was not satisfied about where this was going. Then I bought my first bike. From that moment, cycling was sacred. Later on, I started to train for the triathlon and three years on, I have finished lot of ultra races – Ironman, double Ironman, triple Ironman, 100 mile trail races... But I can not explain how happy I am come back to purely cycling. The mHealth Grand Tour is going to be something big, for me a more spiritual ride because we will cycle some of the routes where the legends rode the greatest batles in the history of cycling. Just to be a small part of that is something special.

The last two months I’ve been crazy. I have bought a new carbon saddle (Selle SMP), new rims, new tires, chain, brakes. All my money goes on the bike and gear. I’m training a lot and I’m hoping that this will be enough as the Tour is going to demand a lot.

I’m also looking forward also to being involved in the clinical study, wearing the continuous glucose monitor (CGM) the whole day while performing at the highest level. This is where technology will give me the opportunity to see my blood glucose level in almost real time and I think for the first time I will be able to push the pedal to max without worrying about whether I will have hypoglycaemia and have the chance to react in time. I’m really looking forward to seeing how this will work.

Most of all I’m looking forward to meeting new people and seeing the beautiful scenery. I’m sure this will be a ride that I will never forget.

Nenad Šimunko is a triathlete with type 1 diabetes and an inspiration to all of us. He will be riding The Epic (all four stages) and participating in the clinical study that will take place during the Grand Tour.

Posted by mhealth4diabetes at 22:27 No comments: