Wake up, stick your finger 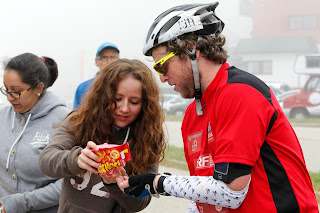 When people with Type 1 diabetes exercise, they’re particularly at risk of hypoglycaemic events, caused by low blood sugar (the ones that fuddle your thinking). They’re at risk immediately after exercise, and again several hours later.

When the “several hours later” happens in the middle of the night, a hypoglycaemic event can be particularly dangerous. Because the athletes are asleep, they don’t notice the danger signs and can’t take corrective action. So when athletes have exercised during the day, some have a snack before they go to bed, some adjust their long-acting insulin dose…and sometimes they still get it wrong.

And when it comes to a multi-day event, well, there just is no data (evidence, best practice…) to help. Welcome to the mHealth Grand Tour.

So our riders with diabetes wake up, stick a finger, take a blood sugar reading, calibrate the Dexcom continuous glucose monitor (CGM) they’ve got stuck into their bodies, figure out what they need to eat and how much (guessing – but at Day 9, they’re getting better at guessing), and head out on the road.

If, despite their best efforts, their blood sugar gets too low, the CGM will beep, vibrate or both – their choice. Time to pull a TORQ gel, or a banana, or a croissant they took from the breakfast buffet out of their jerseys and try to raise their blood sugar.

And they’d better do it quickly – if they get too fuddled, they could end up in a ditch almost without warning.

If they’ve gotten it wrong in the other direction (beep, beep), time for insulin. Some of our Type 1 riders are wearing insulin pumps, some inject manually, but all have to guess how much extra is needed. Experience helps – the Team Novo Nordisk riders have exceptional glucose control, so this is routine for them. We’re learning a lot from them. For the recreational riders, it was originally poke and hope.

Over the ride so far, we’re all getting better. The data we’re downloading will be the first attempt ever to compare elite athletes with recreational riders over 13 days of riding. Look for the first research results in a few months.

Lauren Sarno is the marketing manager for the mHealth Grand Tour. She welcomes your contribution to this blog!
Posted by mhealth4diabetes at 22:43